Dentistry in some form has been around as long as civilization itself – from primitive drills to tooth-pulling barbers.

However, the evolution of dentistry has also gone hand in hand with ongoing advances in technology designed for more effective and comfortable treatment.

Here, we’ll be looking at how dentistry has developed into the modern dental office you visit today.

According to the American Dental Education Association, the history of dentistry – one of the oldest medical professions – can be traced back to 7000 BCE and the Indus River Valley Civilization in what is now Pakistan, northeast Afghanistan, and northwest India.

There’s evidence that these budding dentists plied their trade by attempting to fix cavities with bow drills originally used as woodworking tools.

Several thousand years later, in ancient Greece, and Aristotle and Hippocrates are musing on dental topics such as methods of tooth extraction.

If you had a toothache in the Middle Ages in Europe, you’d see your barber – pulling teeth was a routine part of their job description. 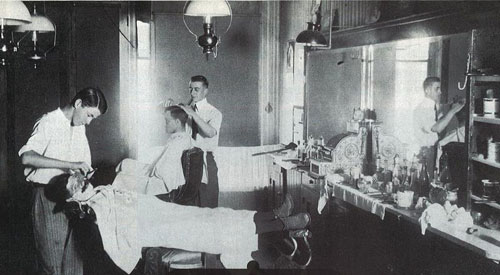 Now we’ll skip ahead to the history of modern dentistry.

How Modern Dentistry Has Evolved

In the early 18th Century, along came a French surgeon who’s now recognized as the Father of Modern Dentistry. Pierre Fauchard defined the first comprehensive dentistry system in an influential 1723 book called The Surgeon Dentist.

In the States, the Baltimore College of Dental Surgery opened in 1840 – the first dental school in the world.

The American Dental Association (ADA) – the world’s largest and oldest national dental organization – was founded in 1859.

The same year saw Emeline Roberts Jones become a partner in her husband’s dental practice in Connecticut. Emeline is often credited as being the first female dentist in the U.S. 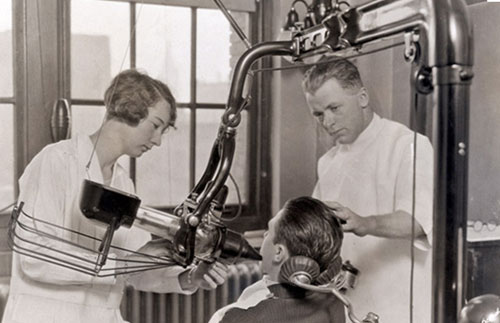 The first dental X-ray was taken in 1896, and five years later Edward H. Angle started the first school of orthodontics.

Shortly afterward, in 1905, anesthesia began to make dental treatment much more comfortable, and the first oral hygiene school opened in 1913.

The high-speed dental drill made its debut in 1957, quickly followed by lasers to treat gum disease. Around the same time, composite resin fillings were developed.

When was the toothbrush invented?

As early as 3000 BCE, Babylonians and Egyptians were using twigs with frayed edges to clean their teeth.

The first bristle toothbrush appears in 1498 in China when hairs from a boar were fixed to bone or bamboo handles.

The first toothbrush with a more modern design was made in England around 1780, with a cow-bone handle and bristles from a pig’s hide.

Mass production of toothbrushes began in the U.S. around 1885.

When was toothpaste invented?

Egyptians are thought to have started using a paste to clean their teeth around 5000 BCE – before they came up with the idea of toothbrushes!

Ancient Romans and Greeks are known to have applied paste to their teeth, and people in India and China were using a form of toothpaste around 500 BCE.

Colgate started mass production of toothpaste in jars in 1873 and introduced the product in tubes in the 1890s.

When was dental floss invented?

Prehistoric peoples used twigs or horsehair to remove particles stuck between their teeth.

In 1815, a Louisiana dentist advocated the use of a thin strand of waxen material to clean between the teeth.

1882 saw the manufacture of silk dental floss. Sixteen years later, a patent was granted to Johnson & Johnson for dental floss, introducing it to the masses.

When were dentures invented?

Etruscans in northern Italy began crafting artificial teeth from animal or human teeth in 700 BCE, and these remained popular for thousands of years. Full dentures made of wood appeared in Japan in the early 16th Century.

Replacement teeth made with ivory were being used in the 1700s, when the first U.S. President, George Washington, popularized them as one of the most notable early denture wearers.

Porcelain dentures made their debut around 1770. From the 1850s, porcelain teeth were being set into dental plates consisting of hardened rubber.

Dentistry has come a long way since makeshift drills and tooth-pulling barbers, with new, innovative practices now being developed all the time.

Smart technology and advances in non-invasive dental treatments will continue to make a visit to the dentist an increasingly comfortable experience.

For instance, new lasers may be used in the future to help prevent cavities before tooth decay even sets in.

Even dental robots are getting in on the act. In 2017, the first robot-led dental surgery was performed in China, under human supervision.

AI – artificial intelligence – is also set to become part of the future of dentistry to diagnose dental problems by training computers to interpret scans and X-rays.

In the home, increased accessibility to connected devices means you can see which teeth you’re brushing through an app on your phone.

Meanwhile, some things stay the same, like the importance of getting regular dental exams, brushing your teeth twice a day, and flossing daily!

Set Up My First Appointment

What Sets Us Apart